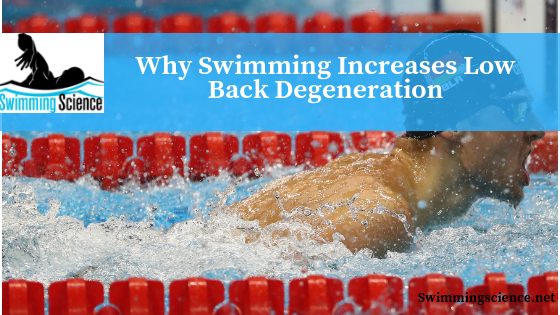 The newest edition of the Swimming Science Research Review was released on Sunday.

Background on Swimming and Low Back Degeneration

The shoulder is the primary site of injury in swimmers, but the low back is the second most commonly injured site. In fact, ~8% of those competing at a 2001 International competition experienced low back pain. Despite the anecdotal claims, few studies have compared low back pain and degeneration in swimmers to a control population. Also, comparing specific stroke specialists has also not been performed, limiting the stress from each swimming stroke.

Many feel butterfly and breaststroke are the most problematic strokes to the low back due to the amount of flexion cycles, but this website has already debunked the flexion cycle debate. In fact, rotation actually increases spinal stress, due to the shear stress at the joints.

Research on Low Back Degeneration in Swimmers

Thirty-eight (68%) elite swimmers and 11 (29%) controls had degenerated discs at various levels. Disc level L5-S1 was more frequently degenerated in the elite swimming group. However, there was no significant relationship of low back pain symptoms associated with this increase in disc degeneration. Swimmers had a lower rate of low back pain, but back pain was more debilitating.

Conclusions on Low Back Degeneration in Swimmers

The L5-S1 segment undergoes greater degeneration in elite swimmers. However, the lack of associating symptoms brings to light the lack of correlation between defects in imaging and symptoms.